Many folks in Higher Education may have studied or familiarized with various identity theories, but how do we put what we’ve learned to practice? How does a theory compare to lived experiences? Two of our NPGS members connected across states over a common experience, being biracial. A common theory that folks may be familiar with is the  Research on Biracial and Multiracial Identity Development. Below are their two brief personal blogs of their experiences.

With these two perspectives, we hope folks revisit the theory, share their experiences, reflect on what we can do in Higher Ed to give space for folks, and debunk multiracial myths.

I'm Alex, a first-generation Mexican-American. I was born stateside to a Mexican mom and an American dad. I grew up in the same Pennsylvania suburb my dad did, right outside of Philadelphia, with Blue Ribbon schools, UPenn health systems, and the Main Line at my disposal. I share this to say I grew up in privileged, predominantly white areas and never felt comfortable completely claiming my biracial identity until college. It was always just a matter of fact; I was half-Mexican, the end.

However, my first time navigating spaces came through an out-of-state, pre-college program I attended the summer before my senior year of high school. During my first time away from home, surrounded by the most diverse group I had ever been around, I realized that I had a lens that made me different from most peers. I still didn’t quite fit the mold in either group, but I could easily navigate both spaces, feel comfortable in both cultures, and live in both worlds simultaneously.

Given that my comfortability arose from spaces in higher ed, I have always felt comfortable being biracial in our field, and for that, I am grateful. I’ve come to learn and own that I am already enough just as I am. I never have to be “white” enough or “Latin enough”. It reminds me of grade school again - my biracial-ness is never a "thing"; it always just "is," it's how I exist. However, I acknowledge that not everyone will feel the same safety and comfort and wanted to share some tips:

Growing up, I was constantly asked, “what are you?”. I didn’t quite understand what that meant and would enthusiastically answer, “I’m Asiah”. When that answer did not satisfy curious minds, I then realized that it wasn’t me they wanted to know, it was my racial identity. Like any child, it became a game of, “what do you think I am?”. I wish the younger me had the insight that I have now to counter and ask, “why does it matter?”.

Just before completing my undergraduate journey, I was invited by a staff member to check out the Multicultural Center. As a first-generation student still navigating resources and my own identity, I didn’t think it was a space for me. Once I learned what it was, I wish someone told me sooner. I was born to a Black dad, had older half-siblings who are white, and raised by my white mom and Black stepdad. I grew up navigating spaces that I never saw myself in or being questioned if I was “enough”. I never saw interracial couples outside of my home, biracial adults, etc. It was difficult embracing who I was especially when filling out tests or surveys that asked about race. I was always flustered when the selection would only allow me to select one. Who do I select? My mom or my dad? Not allowing multiple choice was unintentionally distraughtening. I could select to be an “other”, but that only made me feel more out of place.

When I went off out of state to my graduate program, I realized more than ever the importance of community. My undergraduate institution, a minority serving institution, was definitely different than my primarily white graduate institution. There was nothing micro about the microaggressions and remarks I endured. I have experienced them my whole life, but without a safe place to vent or pause to breathe, it became unbearable. I sought community in an organization on-campus, but unfortunately, I was unwelcomed for not being enough. I found community and mentorship at a different institution I was interning at which played such a strong role in completing my degree. From there, creating and building community became my mission.

In my first professional role, mentorship led me to an experience I will never forget. I became a participant in a series called Unlikely Allies which was a powerful experience that gave me the opportunity to engage with folks who identify as biracial, multiracial, multiethnic, or transracial adoptees (BMMT). The series allowed for folks to engage in conversation with guidance from articles, videos, and discussion questions. It was incredible being able to discuss and to process our experiences in a space where for once, others understood.

Here are some points I learned while navigating my identity-

For folks who do not identify, we hope our stories encourage these things-

Alex Schmied (she/her/hers) serves as the Alcohol & Other Drug Prevention Coordinator at Temple University and is one of NPGS Co-Chair Elects. She enjoys running, crafting, and exploring the city of Philadelphia with her friends and family. You can connect with Alex on LinkedIn or Instagram.

Asiah Claiborne (she/her/hers) serves as the Assistant Director of Student Life Programs at the University of Texas at Dallas and has been a member of the NPGS committee since January 2021. She enjoys volunteering with her alumni network, traveling, and supporting the DFW, TX community with her foodstagram. You can connect with Asiah on LinkedIn , Twitter, or Instagram. 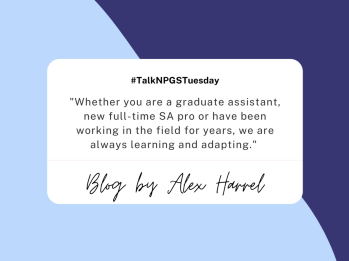 From GA to Full-Time SA Professional